Read more about the life story of James and share your memory.

James Arthur Lauer passed away peacefully at home in his sleep on November 16, 2022.  Born in Kingston, PA Nov. 29, 1968, Jim was the son of James Andrew Lauer and Rebecca Thomas Lauer. Jim lived in Forty Fort, PA and was a graduate of Bishop O’Reilly HS, class of 1987.  He attended E. Stroudsburg University before entering the U.S. Army. He served four years and was a member of C Company, 79th Engineering Battalion.  He served in Germany during the Persian Gulf War. Following his service he was employed as a Corrections Officer in the Wilkes Barre, PA area until moving to Fowlerville, MI to live near his sister, Heather.  He was employed by Walmart-Howell and then Walmart-Fowlerville.  For the past 6 years he was employed at Hatch Stamp in Fowlerville. Jim loved everything Notre Dame, Philadelphia Phillies and Eagles and his Goldendoodle sidekick Finnigan.  Some friends knew him as Jim Sheridan.  That was his pen name when he wrote sports articles. Preceding him in death were his father Jim, Grandparents Art and Reba (Sheridan) Thomas, Grandmother Catherine Zardeski, Uncle Art (Skip) Thomas, several aunts, uncles and cousins. Jim is survived by his mom, Becky, sister Heather Ross (Eddie), nephew Dylan Ross, Aunt, Rosemary Krispin and several cousins.  He will be missed by his Swoyersville boys and by Finnigan.

In honor of Jim’s wishes he will be cremated and there will be no service or visitation.

Anyone wishing to donate in his memory may do so to The Lands at Hillside Farms, 65 Hillside Rd, Shavertown, PA  18708  ( in memo write in memory of Jim Lauer. )  All donations are used for education: Children’s Grief Camp and Summer Farm Camp. 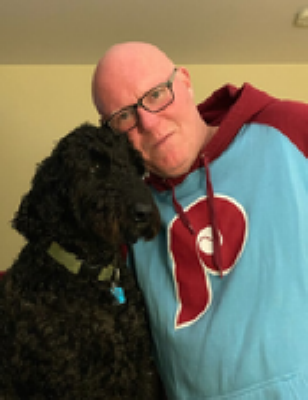